“I would prefer even to fail with honor than win by cheating.” — Sophocles 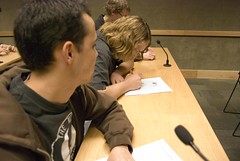 Recently I got into a conversation on a LinkedIn group with someone who believes that cheating must be more widespread by distance learners than those learning in a classroom since only in the latter case can “trusted authorities confirm your performance and mastery because they personally witnessed it.”

Now, this argument is just about as old as distance learning itself, but there are some assumptions behind it that I think are pretty shaky, such as that assessments in both modes of instruction are only based on closed book, closed note exams; that it is not possible for classroom-based students to cheat on such exams; and that there are no processes or technologies available to verify the identity of distance learning students.

In a large lecture hall where there are hundreds of students, those administering tests don’t necessarily know the one sitting the exam is the one whose name it one it. Sure, there are best practices that minimize this risk, but not all schools use them. Harvard’s recent cheating scandal resulted from take home exams, for instance. So much for trusted authorities personally witnessing the performance of their students!

Similarly, when a student hands in a paper, regardless of whether it’s directly onto an instructor’s desk or through an online dropbox, there’s no way to know whether that student really wrote it. In fact, when papers are turned in digitally, it makes plagiarism detection easy, something that’s very challenging for assignments turned in on paper.

Either way, this is probably an area where research would be better than supposition, and interestingly, the study I’ve seen most often suggests that online students cheat less than than their classroom-based peers, not more:

The prevalence of academic misconduct among students enrolled in online classes was explored. Students (N = 225) were given the Student Academic Dishonesty Survey to determine the frequency and type of academic dishonest behaviors. Results indicated that students enrolled in online classes were less likely to cheat than those enrolled in traditional, on ground courses. Aiding and abetting was self-reported as the most frequently used method among students in both online and traditional classroom settings. Results suggest that the amount of academic misconduct among online students may not be as prevalent as believed.

To return to supposition, though, I can’t help but wonder whether a reason distance learners would cheat less often than those in a classroom would be that they are not actually necessarily peers. The classroom attracts more traditional age university students, who might not have various motivations for being there, whereas distance learning often attracts workign adults, who have gone back to school with the specific objective of learning more to advance in their careers, or to pursue various other interests. It would only make sense that such distance learners would realize that academic dishonesty would only be cheating themselves.