My friend Kirsten Tynan recently posted the following, and I think I may have taken it a little too seriously. 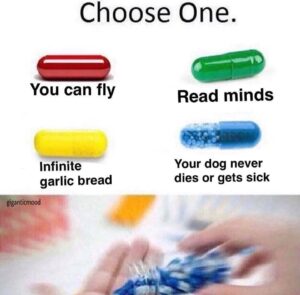 You’ll take the blue pill, because you love your dog, obviously. No, wait, actually not the blue one, because you love your dog. Think for a minute about what a terrible fate “never dies” might be when “doesn’t age” and “can’t be injured” aren’t explicitly included. And even if they are, sure, everything’s fine for a few hundred million years, but then solar output sequesters enough carbon dioxide from the atmosphere into the Earth’s crust that photosynthesis stops working. No plant life, therefore no animal life, nothing to eat ever again. But worse, after a few billion years of that the Sun engulfs the planet. And after a few billion years of living in a fusion reaction the Sun goes cold and now Fido the Undying is stuck waiting for a trillion or so years for the end of the universe… except that apparently your hapless hound will even survive either the Big Crunch or the Big Rip.

So fine, how about yellow. No need to be selfish here, because there will be enough garlic bread available to end world hunger, right? You’ll be a hero! Next to you even Norman Borlaug will seem like a slacker! Except… consider that it says “infinite”, not “as much as you want up to infinite”, so on taking that pill, suddenly the entire universe would have infinite density, meaning all of existence would become a single gigantic black hole. On the plus side, yes, that would end world hunger, but not in the way one might hope.

Green is pretty useful, though, right? If you know what people are thinking, you can amaze them, or get away with almost anything, right? Sure, until you go insane. That one doesn’t say “read minds whenever you wish” and it doesn’t say anything about distance being a limitation, so if you take this one, your existence becomes a ceaseless cacophony of billions of thoughts. They’ll need to put you in a medical coma forever just to keep you from killing yourself. (And you’d better hope no one gives your dog a blue pill!)

But hey, red sounds pretty cool. Nothing could possible go wrong with that one.

“There is something fascinating about science. One gets such wholesale returns of conjecture out of such a trifling investment of fact.” — Mark Twain When it comes to climate change, I have to admit that I don’t really know what’s going on. I know that both sides are cocksure and have incentive to promote their positions, meaning that neither should be trusted out of hand. It seems that more experts believe that the climate is changing than not, but that’s only so helpful to me, as I’ve worked with university faculty, and have seen firsthand how impressed with their own infallibility they can be, and how rarely they change their mind once it’s made up. There’s good reason for the saying that science advances one funeral at a time.

The way I see it, the climate change issue is really a series of three questions, all of which must be answered affirmatively for dramatic action to be warranted:

While I’m no climatologist and don’t claim to know for sure, I expect the answer to the first one is probably yes. I realize there are some issues with the data that are used to support this theory, but given that the climate has always been dynamic, it’s not so difficult to believe that the average global temperature is on an upswing.

I can also believe that the second one is at least partially yes. The long list of species that we’ve hunted to extinction show that humans can affect the environment to its detriment. If there are enough of us, we don’t even need advanced technology to do it — ask a woolly mammoth.

I think the third one is a lot more iffy, though. Many of the apocalyptic predictions are based on worst case scenarios, and computer models rather than direct observation. I work with computers, and one thing I know is that the problem with them is that they always do exactly what you tell them. Unless the model is strikingly accurate, there’s always that cause for uncertainty. Moreover, whatever negative consequences there may be should be weighed against the benefits that have come from industrialization, like average lifespans that are decades longer now than they were when we first started burning coal. I’m fine with moving to an economy that uses less carbon, but in the meantime do we really want to do without modern technology? If we tried, how many people would die earlier than they would otherwise?

I’m thinking about all this today because of a piece I read in The Hill saying that Todd Stern, the top climate negotiator for the U.S., is calling on scientists and policymakers to orchestrate an educational effort to change the public’s perception about climate change. Regardless of what the answers to those three questions are likely to be, is it really the government’s place to tell people what to think? Clearly not. But even if it is, would it do any good? Natural selection has been taught in American schools for a century, yet a recent Gallup poll shows that four in ten Americans believe that Creationism is literally true, and that only one in six Americans believe that humans evolved without divine intervention. With ignorance like that, what chance is there to educate the American people on a scientific topic that’s so complex there is still reasonable uncertainty about important details?